Allergies and Stress: Who knew?

Signs of allergy season began for me this past month but to the extreme. Sinus pressure and headaches were more distracting and disconcerting than ever before, and this past week my chest has felt tight.

Perhaps the ragweed count in Kansas City is at record levels. Had a suspicion it was something to do with me. So what's going on? I asked myself.

After researching yoga poses for allergies and asthma due to the tightness in my chest, I found the online Yoga Journal article "Allergy Antidote." It correlates asthma and allergies to stress and how having a more calming yoga practice can help alleviate symptoms.

Migdow suggests you make de-stressing your immune system a priority by modifying your yoga practice to be less vigorous and much more calming. "For example, avoid Bikram Yoga or Ashtanga Yoga where there is already heat. Instead, practice asanas in a smooth and relaxing way with lots of slow breathing."'

Must admit, I have been giving the pressures in life more power than they deserved, but to have my body reacting to it as allergies. Who knew? 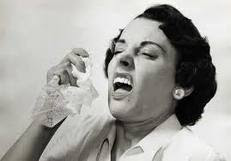 After returning to the Midwest four years ago, I visited an allergist upon having allergy symptoms for the first time in my life. A few tests later only revealed mild allergies and a slight athletic asthma. Took the prescriptions for a while. Once they ran out, I switched to the more holistic nasal rinsing since soon after I became pregnant.


Although now nasal rinsing didn't seem to help as much. Nor did taking several Claritin and Sudafed generics per day.