This waiting game is completely ridiculous. I don't know how women throughout the ages survived it. Guess they didn't have sonograms giving them a due date that apparently only five percent of women actually hit.

Can you believe that - only five percent of women give birth on their due date??? Why does the medical field dangle a date in front of an expectant mother that has such low odds??? GRRRR!!! Especially when we're super hormonal, carrying an extra 30-plus pounds and just plain want to meet our new son or daughter. You know what the answer is - MEN! It's because men still dominant the medical field and have no CLUE how torturous this wait is on women. Okay, I better digress before I start alienating the few male readers I may have... hee hee.

Since late Tuesday night, I've been feeling what apparently are prelabor contractions. They feel like PMS cramps - that dull aching in your belly. I told my midwife about this on Thursday when I saw her for the second time this week (the first was on Monday). Due to the long, holiday weekend and since my due date is Sunday, she thought it'd be best to not wait longer than a week. She now puts me at 3 cm dilated and 80% effaced! I have another appointment set up for next Wednesday (post-due date), but she said she'd be surprised with all my body's progress if I would need it. She did give me light at the end of the tunnel that if the baby wasn't here by next Wednesday, we could probably schedule an induction next Thursday or Friday since my body is so ready to go. THANK GOODNESS! One woman at work told me she was two weeks over due before her doctor induced, and I almost let out a scream of horror!

Last night I had fairly clear-cut contractions for about three hours every 10 minutes for 30-45 seconds, and I really thought, THIS IS IT! but then they started leveling off to 15 minutes and I just went up to bed by 10 p.m. ... This kid is already toying with me! ;) lol

No baby yet, but I'm hoping this Memorial Day weekend will bring us our little bundle of joy!
at 7:44 AM No comments:

Getting our dog ready for baby

Four days and COUNTING LOUDLY. Can you hear me God? I've been reading my newborn-care baby books and articles and watching the DVDs so we're ready to go! I'm so anxious to meet this little guy or gal. I've been having a bit of cramping today, which I chalk up to Braxton Hicks contractions since they have been fairly random and not really painful as I imagine full-on labor contractions to be. It's so hard to know when it's really time. 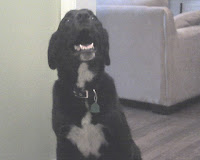 Our current baby is Charlie, who will soon become our dog once our baby girl or boy arrives. He's a lab-border collie mix so he's a big boy at 80 pounds and is very sweet and lovable. Our neighbors adore him because he never barks. He's also pretty good with our nine-month old niece, but he is a bit oafish. Loves to step on our toes so I'm a wee bit nervous about him being around our newborn. Thought I'd make him the subject of today's post since I found a good online article called "Preparing Pets for the New Arrival."

Here's a few tidbits from the article I thought were the most helpful:

My FINAL weekly midwife's appointment before my due date was yesterday. She now puts me at 2 cm dilated and 75 percent effaced.

I'm hoping all this forward progress prior to labor means the baby will shoot right out... but not too fast. My mother's favorite story (or at least the one I remember hearing the most) about me as a baby is that I shot out like a cannon during delivery and consequently had a mean-looking conehead for the first few days of my life. My grandpa even said to put me back in! Not nice Wilbur, especially for a doctor! Apparently my husband was a cone-headed newborn as well. The odds don't look so good for this baby. Note to self - make sure to pack a hat! LOL! ;)

Come on kid! We're all so eager to meet you, and selfishly I would like to be able to stop waddling and wear cute summery shoes. Not to mention the chore of getting up and down, especially from a supine position. And I won't even broach the topic of losing my ENORMOUS belly - see post from Sunday for latest photo.
at 7:39 AM 4 comments:

YogaJournal.com sends me "Daily Insight" e-mails. A few weeks ago, the week's focus was on meditation so I saved some to help guide me in writing my "Meditation Monday" posts. Especially with the birth imminent, I just can't seem to conjure up too many original thoughts so thank you YJ for some fresh ideas on the subject.

In your next meditation practice, try to meditate on the word "yoga" or the definition of yoga, which is "union." Continually repeat it in your mind. What thoughts or associations do you conjure up as you do this?

Now concentrate on the word yoga or union and allow your thoughts to dissipate. If you notice your mind going elsewhere, bring it gently back to the word without any judgment. As the e-mail stated, "You are moving into a direct experience of what union truly means."

One week to go 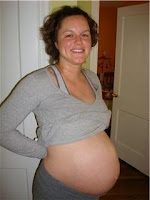 Okay, I am! I'm going nuts waiting for this kid to arrive. Especially after our false alarm last Tuesday. It became so much more apparent the baby could show up ANY time now, and I'm definitely ready for it. Perhaps not ready in the terms of I know how to do everything, but the fear of actually taking care of the baby has been overshadowed by my discomfort of late pregnancy coupled with my impatience.

Since Tuesday, I haven't really experienced any contractions, at least nothing like I did the other day. If those weren't "real" contractions, I'm more fearful than ever what the true ones feel like. Breathe, breathe, breathe! OMMMMMMMMMMMMMM! (There's my yoga tip for the day. Actually I did a little yoga this morning. Mainly half sun salutes, hip rolls and pelvic tilts.)

I think I'm in full-on nesting mode. Friday evening I got a wild hair to research various recipes that freeze well so I could make a bunch of meals to save for after baby's arrival. My friend Libby inspired me because she made three freezer meals for us earlier this week in preparation for baby to be.

After finding some cool Web sites on the subject (am I lame or what?), I realized OAMC is the acronym a lot of these folks use for making freezer meals - Once A Month Cooking. I ended up following "the plan" method for freezer cooking, which means I made a bunch of food based on one type of meat - I chose chicken. Also seems more efficient to me to make two or three of the same meal so I ended up creating four different recipes and twice the quantity of each for eight meals.

I don't know how people cook for an entire month in one day. It took me a half a day to cook the eight meals, and I am now spent. In fact, my feet are all swollen, and I even made sure to sit and take breaks. Now I'm blogging with my feet propped up higher than my heart. I'll probably do legs up the wall pose a little later and maybe even take an epsom salt bath to help... usually works.

All the various Web sites (check out the ones I saved on my del.icio.us) stressed to shop one day and cook the next. Yet I was so excited about doing it (yes, I'm a dork!), I really wanted to cook after I grocery shopped. Luckily my husband encouraged me to stick to the instructions and am so glad I waited. It's definitely tiring cooking that much stuff, especially when 39 weeks pregnant, but I have to admit it was kind of fun. My hubby was smart and decided to go pursue one of his interests outside the house while I cooked (i.e., poker at the boats). So I turned up my tunes, sang and cooked away!

Perhaps I could've done some prep work (cut some veggies and cooked the chicken up) the night before, but all in all, I'm so glad I did it. Now we have eight meals I made plus Libby's three for a total of 11 meals! I think some of it might actually be more than one meal, at least for the two of us, so it may end up being about 15 meals, give or take.

So no baby yet, but at least this future mom and dad will have more time to take care of him or her instead of spending time cooking.
at 1:45 PM 2 comments: