Laughter is good for baby too 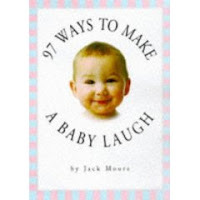 Gratitude is key to leading a happy life. Lately I'm so grateful for all the generosity exhibited towards me during my pregnancy - people love to give baby gifts! The other day Maureen, a coworker and friend, stopped by out of the blue and gave me the book 97 Ways to Make a Baby Laugh by Jack Moore.

It's such an adorable book with cute baby photos on every page and 97 ideas on how to play with your baby. As I blogged about the other day, laughter is good medicine, not only for mama but for baby too.

Below are some "laughing" ideas for your baby from the book:
at 6:26 AM 4 comments:

Okay, I must have another celebrity gossip session (my weakness!) about the newly expecting.

Gwen Stefani is the latest to join the preggers club for the second time. Her son Kingston is adorable so I can only imagine how cute this next one will be. There's also speculation Brangelina is pregnant again - she wore a very floaty dress at the SAG awards this past Sunday and apparently they walked past the media.

I guess there really is a celebrity baby boom!

Another side effect of pregnancy... FUN!

Starting on Sunday, I began to notice I was really tight on both sides of my groin, especially when I transition from sitting to standing. I was afraid I wouldn’t be able to teach yoga last night, but it seemed to subside during it. Although once I walked out of class, it was there again.

Apparently it’s normal according to a discussion thread on Baby Center. Several other pregos talked about having the same symptoms between 23 (which is where I am) and 28 weeks.

During my WWW search, I also found an article on What to Expect about it – it’s called symphysis pubic dysfunction, or SPD, and is relatively common. “It's caused by a relaxation of the ligaments that normally keep the two sides of the pelvic bone tightly bound together at the symphysis pubis, the joint in the pubic area.”

WTE recommends pelvic exercises like Kegels and pelvic tilts (cat/dog). Also sit when dressing (I actually had to do this at the YMCA last night when changing for my yoga class), take one step at a time and avoid heavy lifting.

Check out this prenatal yoga class (13 minutes) for shoulders and chest opening poses. Discovered it online at Prenatal Yoga Center, a studio based in NYC. From what I've seen so far, it looks really good. I'll try it out soon and will let you know.
at 7:29 AM No comments:

Laughter yoga may be the best medicine

Is being healthy as easy as prescribing a specific amount of laughter throughout your day? According to an article on the Web,“Health a laughing matter” it is or at least it can help, especially for women.

Scientists from the University College London took saliva samples from 3000 men and women and measured levels of hormones and proteins linked to heart disease, cancer and high blood pressure. At the same time, the volunteers were asked how happy, content or excited they felt at that particular time.

The scientists found that among women, but not men, happiness correlated with lower levels of the hormones and proteins, suggesting that happy women are more likely to be healthier.

In this same article, Oprah talks about "Laughter Yoga," which my mother brought up to me months ago after watching it on the popular talk show. When my mom first told me about the type of yoga, I instantly thought it was a crock, but maybe I made a snap judgment. According to the Laughter Yoga Web site, the practice combines laughter exercises and yoga breathing to give you the health benefits of hearty laughter."

Viewed a few Laughter Yoga demonstrations posted on YouTube. May have to try some out, but for now I think I'll be doing it alone and behind closed doors... :)