Salma Hayek had an interesting story in People about becoming a new mother, and I related to her desire of wanting a boy. I've been thinking I really would like having a boy - remember we aren't finding out the sex of our baby until he or she is born. When asked why she felt this way, Hayek responded by saying, '"Probably because I was afraid. I think women suffer a bit more than boys, and there is always conflict between mothers and daughters."'

Not that I had a negative relationship with my mom (far from it!), yet it is tougher for daughters and mothers to connect, I think because mothers are more worried about their daughter's decisions since they were once in the same shoes. Fathers don't have the same fear and therefore girls become "daddy's girl."

I guess I just want to have a special connection with my baby, but it sounds like Hayek has that with her little baby girl after reading this quote she gave to the April edition of Glamour. '"I feel I was born to have this girl."'

And I know I will feel a special bond with my child too... No matter what gender the baby turns out to be. Truly, I only pray for a healthy and happy baby.
at 12:43 AM No comments:

Found a review for Crunch: Yoga Mama dvd - guess I'm not the only Yoga Mama out there! The review was a little iffy - rated a three out of five with the following comment. "Easy pace yoga routine for women in their third trimester."

If you have a Netflix subscription, you should try it because it's available as a play now option right on your computer so you don't have to wait for it to arrive in the mail. Netflix rocks my world!

Tried it this morning. As the review states, the practice does move slowly and is more focused on flexibility, so it's not my favorite. However, if you're pregnant and new to yoga or are in your third trimester, it's a good place to start. It's also a fairly short routine - about 40 minutes - which makes it easier to fit into your day.
at 7:46 AM No comments:

Along with the rest of the world, I'm reading "A New Earth: Awakening to Your Life's Purpose" to take Oprah's online course with author Eckhart Tolle exploring its meaning. The hubby and I tried to watch the first live webcast this Monday, but due to so many viewers (over 500,000!), our Internet connection kept stalling. It didn't surprise me since I work closely with the webcast group in my corporate day job and know the technology can get overloaded with far fewer numbers. I still give credit to Oprah for being a pioneer and for being smart by offering a web and audio replay (I still need to watch the rest of Monday's!).

A few friends at work are also reading the book; one of them said it wasn't clicking with her. A few years ago, I tried to read Tolle's first book "The Power of Now," but it didn't resonate with me and I quit it after a few chapters. At the time, I was practicing the physical postures of yoga but wasn't really into the spiritual side of it yet. Now my practice has deepened where I've begun to study Patanjali's Yoga Sutras and other spiritual yogic texts. After only reading the first two chapters of "A New Earth," I already see a lot of similarities between the novel and yoga. In fact, I just read a blog post expressing the same parallel on The Everything Yoga Blog.

Take advantage of the opportunity to read "A New Earth" while benefiting from the input of the author and Oprah for 10 weeks. Tell me if you're reading it too and how it's going for you. 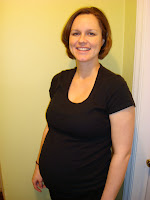 How am I already 28 weeks pregnant AND beginning the third trimester? Where does the time fly?

Counting the baby's movements is something I apparently should start doing to monitor the baby's health, according to a Web article I found the other day. The average times a baby will move is about 10 times within a two-hour period by week 28. The little squirt has been moving a ton lately, which is reassuring yet freaky at the same time. Especially since it is 2.4 pounds and the size of a Chinese cabbage - I'll never look at vegetables the same way again after this little cabbage sprouts! 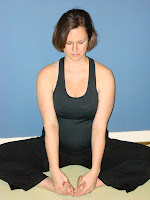 A historic day in many ways

Tomorrow will be a historic day in U.S. presidential history since it will probably decide the 2008 Democratic nominee. Hillary Clinton must sweep the primaries in Texas and Ohio to have a chance over Barack Obama.

I have mixed emotions on the outcome. Either candidate will hopefully bring change desperately needed for the country and the world. Not sure if it's because I was raised by a history teacher, but I've always been intrigued by politics; in fact it was my minor in college. In 1998 I worked on the White House project, which was created to promote women in leadership - the goal to have a woman president by 2008. Here we are, scarily for me 10 years later (Seems like yesterday I was at Iowa State!), and the possibility of having a woman president is a reality! It's like a dream come true for me. I believe Clinton would be a strong commander in chief, but I worry she will polarize our country just as much as Bush, just in the opposite direction. It surprises me how many of my friends and family - young, old, men, women - do not like her. But I do think she gets judged harshly for being a strong woman. As Tina Fey said on SNL two Saturdays ago, "Bitch is the new black."


I had the pleasure of seeing Obama speak in my hometown of Council Bluffs, Iowa the Saturday after Thanksgiving prior to the Iowa caucus. My hubby and I joked it was our unborn baby's first political event - we're afraid we are going to have an Alex P. Keaton since we're such liberals. It shocked me how many of my friends and family who are politically minded didn't want to go see him. Think a lot of it had to do with them being fed up with the gazillion political calls received precaucus. Obama's positive campaign message is refreshing, and as Clinton sinisterly insinuates, the guy is a powerful speaker, especially in person. Seeing him did make me rethink my loyalty to Clinton. Am I only loyal to her because she is a woman? I'm not sure...

Quite honestly, I will be thrilled with either candidate, but I admit I will be bummed out if Clinton doesn't win the nomination. Maybe not because I'm such a fan of hers but a fan of the idea she represents. I want my child to know that whether she is a woman or if he is a boy, either has the opportunity to be whatever he/she wants, including the U.S. president.
at 12:01 AM 5 comments: 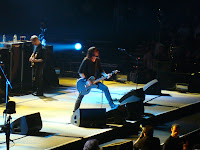 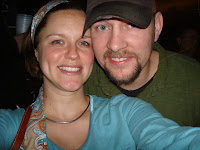 Possibly our last weekend getaway before baby arrives, the hubby and I traveled to my hometown of Council Bluffs, Iowa to see the Foo Fighters for the third time in concert. The first time we saw the band was also in the Omaha area about five years ago and the second in Atlanta on the first date of the group's last tour a few years ago.

The band recently won the Grammy for best rock album and seeing them in concert again showed why. Not that I'm a huge Foo Fighters fan like the hub, but the group does put on a kick-ass show.

I took some photos and video (not the best footage but I had to be cool like the "kids" and take some!)